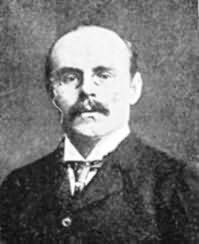 (1856 - 1934)
Thomas Anstey Guthrie was an English novelist and journalist, who wrote his comic novels under the pseudonym F. Anstey.

He was born in Kensington, London, to Augusta Amherst Austen and Thomas Anstey Guthrie. He was educated at King's College London and at Trinity Hall, Cambridge, and was called to the bar in 1880. But the popular success of his story Vice Versa (1882) with its topsyturvy substitution of a father for his schoolboy son, at once made his reputation as a humorist of an original type. He published in 1883 a serious novel, The Giant's Robe; but, in spite of its excellence, he discovered (and again in 1889 with The Pariah) that it was not as a serious novelist but as a humorist that the public insisted on regarding him. As such his reputation was further confirmed by The Black Poodle (1884), The Tinted Venus (1885), A Fallen Idol (1886), and other works. Baboo Jabberjee B.A. (1897) , and A Bayard from Bengal (1902) are humorous yet truthful studies of the East Indian with a veneer of English civilization.

Guthrie became an important member of the staff of Punch magazine, in which his voces populi and his humorous parodies of a reciter's stock-piece (Burglar Bill, &c.) represent his best work. In 1901 his successful farce The Man from Blankleys, based on a story which originally appeared in Punch, was first produced at the Prince of Wales Theatre, in London. He wrote Only Toys (1903) and Salted Almonds (1906).

Many of Anstey's stories have been adapted into theatrical productions and motion pictures. The Tinted Venus was adapted by S. J. Perelman, Ogden Nash, and Kurt Weill into One Touch of Venus in 1943.