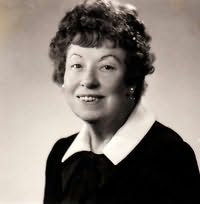 (1892 - 1982)
Harriet Adams (born December 11, 1892 in Newark, New Jersey as Harriet Stratemeyer, died March 27, 1982) was an American juvenile mystery novelist and publisher who authored some 200 books over her literary career. She wrote many books in the Nancy Drew series and a few in the Hardy Boys series under the pseudonyms Carolyn Keene and Franklin W. Dixon. She also oversaw other ghostwriters who wrote for these and many other series. She was the daughter of Edward Stratemeyer and, with her sister Edna, took over control of the Stratemeyer Syndicate upon his death in 1930. Adams is primarily credited with keeping the Syndicate afloat through the Great Depression, and with revising the two most popular series, Nancy Drew and the Hardy Boys, in the 1950s and 1960s, removing stereotypes and outdated ideas and language.

Adams graduated from Wellesley College in 1914. She resided in Maplewood, New Jersey, and in Pottersville, New Jersey, an area within Bedminster Township.