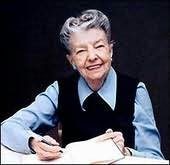 After graduating from Chicago's McKinley High School in 1924, Phyllis began to write seriously. Beginning with short stories, she finally sold one to the Chicago Daily News.

During the 1940's, Phyllis A. Whitney served as Children's Book Editor of the Chicago Sun's Book Week (1942-1946) and the Philadelphia Inquirer (1947-1948). In 1941, her first book for young people, A Place for Ann, was published by Houghton Mifflin. And in 1943, her first adult suspense novel, Red is for Murder, was published by Ziff-Davis Publishing Company. She also taught juvenile fiction writing courses at Northwestern University in 1945 and at New York University from 1947-1958.

Phyllis A. Whitney has one daughter, Georgia, three grandchildren -- Barbara, Michael, and Lorraine, and two great-grandchildren, Danny and Matthew.

Cat's Eyes (1991)
Alan Scholefield
"A lovely, eerie suspense novel that held me from first to last. I can still imagine that face at the window!"

So Shall You Reap (1992)
Marilyn Wallace
"Tantalizing, suspenseful, and satisfying."

Trail of Murder (1992)
(Lee Squires, book 1)
Christine Andreae
"I thoroughly enjoyed Trail of Murder, from its startling opening to a most satisfying conclusion. Christine Andreae writes so vividly that I feel as though I've experienced a wilderness trip in Montana with all those suspicious characters. Here is an outstanding new mystery talent to follow eagerly."