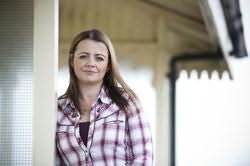 (b.1975)
Carys was born in Southport in 1975 and has lived in Utah, Exeter and Bournemouth. The daughter of devout Mormon parents, she developed an early love of fantastical stories and a fascination with angels, gold plates and lost civilisations. Carys has spent huge chunks of her life with her nose in a book. In fact, if it was at all possible, shed probably insert her whole self between the pages like Woody Allens Sidney Kugelmass.

Carys always dreamed of being a writer but at some point during a sleep-deprived, toddler-filled decade she forgot, or she lost her nerve its all a bit of a fog. In 2009 she achieved a BA in Literature from The Open University and in 2010 she completed an MA in Creative Writing at Edge Hill University. She went on to win the MA category of the 2010 Edge Hill Prize and since then she has had stories published in a variety of literary magazines, in print and online. Her debut collection Sweet Home won the Scott prize. A Song for Issy Bradley is her first novel. Carys lives in Southport with her husband and four children.
Novels
A Song for Issy Bradley (2014)
The Museum of You (2016)
When the Lights Go Out (2020)

The A-Z of Everything (2017)
Debbie Johnson
"Funny and poignant - a celebration of life and the enduring power of love."

See What I Have Done (2017)
Sarah Schmidt
"Vivid, sultry and engrossing."

All the Good Things (2017)
Clare Fisher
"Compassionate and beautifully written."