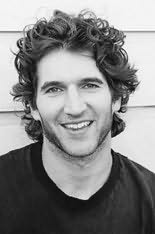 David Benioff was born and raised in New York City. He adapted his first novel, The 25th Hour, into the feature film directed by Spike Lee. With many other screenplays to his credit, he is also the writer of the films, "Brothers" and "X-Men Origins: Wolverine". Stories from his critically acclaimed collection When the Nines Roll Over appeared in Best New American Voices and The Best Nonrequired American Reading. His latest novel is City of Thieves. He lives in Los Angeles with his wife Amanda Peet and daughter where he is a co-creator and writer for the HBO hit series "Game of Thrones."
Novels
The 25th Hour (2000)
City of Thieves (2008)

Collections
When the Nines Roll Over (2004)

Lucky Wander Boy (2003)
D B Weiss
"With dazzling intelligence and mordant humor, D. B. Weiss does for video games what Michael Chabon did for comics."