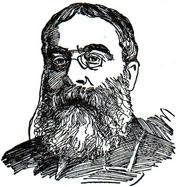 (1836 - 1901)
Sir Walter Besant was a novelist and historian from London. His sister-in-law was Annie Besant.The son of a merchant, he was born at Portsmouth, Hampshire and attended school at St Paul's, Southsea, Stockwell Grammar, London and King's College London. In 1855, he was admitted as a pensioner to Christ's College, Cambridge, where he graduated in 1859 as 18th wrangler. After a year as Mathematical Master at Rossall School, Fleetwood, Lancashire and a year at Leamington College, he spent 6 years as professor of mathematics at the Royal College, Mauritius. A breakdown in health compelled him to resign, and he returned to England and settled in London in 1867. He took the duties of Secretary to the Palestine Exploration Fund, which he held 1868-85. In 1871, he was admitted to Lincoln's Inn.
Novels
The Doubts of Dives (1872)
The Inner House (1888)
Blind Love (1890) (with Wilkie Collins)
Beyond the Dreams of Avarice (1895)