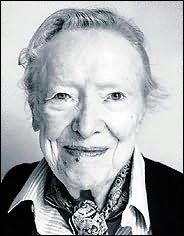 (1911 - 2006)
The novelist Sybille Bedford's surname - very English, rather colourless - was deceptive. She underwent a brief marriage of convenience to an Englishman in 1935, but she was born in Charlottenberg, an area of Berlin, the daughter of a German nobleman and an Italian princess. The couple latterly lived apart, and on her father's death, the seven-year-old Sybille rejoined her mother in Rome, thence moving to London "for an education which did not take place".Mother-daughter relationships for Bedford, who has died aged 94, were deep and maddening - with flakes of farce and comedy - and they pervade her three autobiographical novels: A Favourite of the Gods (1963), A Compass Error (1968) and Jigsaw (1989). The idea that she was "educated privately" is also enigmatic. Actually, she learnt from her father, a connoisseur of wines, and from her cousins. From her sophisticated but erratic mother, she sensed the nature of life: marvellous plans, disappointments, the delights of self-discovery, dramatic non sequiturs, ambiguous goals and rewards. She relished friendship, literature, good talk and careful cooking.
Novels
A Legacy (1956)
The Faces of Justice (1961)
A Favourite of the Gods (1963)
A Compass Error (1968)
Jigsaw (1989)