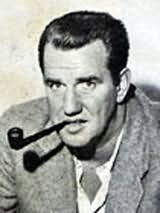 aka P F Costello, Bill Peters, Gerald Vance
William Peter McGivern (December 6, 1918 - November 18, 1982) was an American novelist and television scriptwriter. He published more than 20 novels, mostly mysteries and crime thrillers, some under the pseudonym Bill Peters. His novels were adapted for a number of films, among them Odds Against Tomorrow (1959), a noir tale of three losers, The Big Heat (1953), starring Glenn Ford as a cop that will do anything to get his man, and Rogue Cop (1954) a film noir directed by Roy Rowland. The "Big Heat" received an Edgar Award in 1954 as Best Motion Picture, which McGivern shared as author of the original novel.

Born in Chicago, Illinois, McGivern grew up in Mobile, Alabama. After serving in the Army in World War II and studying at the University of Birmingham, McGivern returned to the US and worked for two years as a police reporter for the Philadelphia Bulletin and later as a writer for the Evening Bulletin in Philadelphia. His first hardboiled novel appeared in 1948.