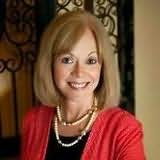 aka Terri Herrington, Tracy Hughes
Terri Blackstock is a New York Times best-seller, with over six million copies sold worldwide. She is the winner of two Carol Awards, a Christian Retailers Choice Award, and a Romantic Times Book Reviews Career Achievement Award, among others. She has had over twenty-five years of success as a novelist.

Terri spent the first twelve years of her life traveling in a U.S. Air Force family. She lived in nine states and attended the first four years of school in The Netherlands. Because she was a perpetual new kid, her imagination became her closest friend. That, she believes, was the biggest factor in her becoming a novelist. She sold her first novel at the age of twenty-five, and has had a successful career ever since.

Recent books include Truth Stained Lies (Book 1 of her Moonlighters Series), and her acclaimed Intervention Series (Intervention, Vicious Cycle, and Downfall). Other recent favorites include Predator, Double Minds, the Restoration Series, the Newpointe 911 Series, the Cape Refuge Series, and the SunCoast Chronicles series.

In 1994 Terri was writing romance novels under two pseudonyms for publishers such as HarperCollins, Harlequin, Dell and Silhouette, when a spiritual awakening prompted her to switch gears. At the time, she was reading more suspense than romance, and felt drawn to write thrillers about ordinary people in grave danger. Her newly awakened faith wove its way into the tapestry of her suspense novels, offering hope instead of despair. Her goal is to entertain with page-turning plots, while challenging her readers to think and grow. She hopes to remind them that theyre valued by God and that their trials have a purpose.

Omnibus
Second Chances / Under the Mistletoe / For Auld Lang Syne (1992) (with Pamela Browning Flanders and Rebecca Horsfall (as by Tracy Hughes) )
Sweet Delights (2001) (with Ranee McCollum, Beth White and Elizabeth White)
Miracles (2008)
Chance of Loving You (2015) (with Candace Calvert and Susan May Warren)

The Unfinished Gift (2009)
(Homefront , book 1)
Dan Walsh
"Make sure you have a tissue nearby, because you are going to need it."

Someone to Blame (2010)
C S Lakin
"As convicting as it is moving... readers will enjoy this rising new talent."

Over the Edge (2011)
Brandilyn Collins
"This book stayed with me long after I put it down. Not only was it a page-turner, but the storyline about Lyme Disease was fascinating and eye-opening. I think Over the Edge will raise awareness about this horrible disease, and validate those who suffer with it."