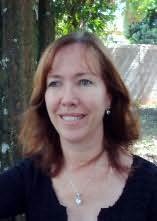 A three-time Golden Heart finalist, Tina Beckett is the product of a Navy upbringing. Always on the move, her travels eventually took her outside of the United States, where English reading material was scarce. Her supply of books ran out, and she started writing her own stories, fashioned after the romance novels she'd loved through the years. She finished that first book and moved on to the next. After the fourth manuscript, she realized there was no going back... she was officially a writer.

Tina has won several writing awards, including the Linda Howard Award of Excellence, The Molly, The Tara, Finally a Bride, and the Four Seasons.

When not in the middle of her latest book, Tina enjoys crafting stained glass panels, riding horses and hiking with her family. Fluent in Portuguese, she divides her time between Brazil and the United States and loves to use exotic locales as the backdrop for many of her stories. You can often find Tina hanging out on Facebook, and twitter.