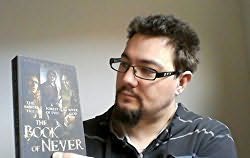 Ashley is an Australian novelist, poet & teacher. He is the author of five novels and six poetry collections. 'City of Masks' is his debut novel and a sequel, 'The Lost Mask' was released in 2015. His latest is 'Crossings' - a supernatural thriller set in Australia.

Ashley occasionally dabbles in film, is addicted to 80s cartoon shows and Studio Ghibli films, and finds himself constantly awed by the simple beauty of haiku. He is also convinced that Magnum PI is one of the greatest TV shows ever.