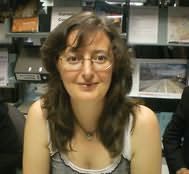 Australia (b.1969)
Trudi Canavan was born in Kew, Melbourne and grew up in Ferntree Gully, a suburb at the foothills of the Dandenongs. From early in her childhood she was creative and interested in art, writing and music. After deciding to become a professional artist she completed an Advanced Certificate in Promotional Display at the Melbourne College of Decoration, where she received an award for Highest Aggregate Mark in Art Subjects in 1988.

In 1999 she won the Aurealis Award for Best Fantasy Short Story with “Whispers of the Mist Children”. In the same year she was granted a writers residency at Varuna Writers’ Centre in Katoomba, New South Wales.

Across the Face of the World (2004)
(Fire of Heaven , book 1)
Russell Kirkpatrick
"Not since Tolkien have I been so awed."

Walking the Tree (2010)
Kaaron Warren
"Like walking from a dream into a mythical land both familiar and delightfully strange. A tale of tolerance and survival, in a fascinating and beautifully realised world."