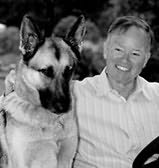 (b.1941)
Captain Peter T. "P.T." Deutermann USN is an American writer of mystery, police procedural and thriller novels. Deutermann served in the United States Navy for 26 years, earning 19 medals and decorations. He served as the commander of the USS Tattnall between 1981 and 1983. He also served on the USS Morton, USS Hull, USS Jouett and USS Charles F. Adams, while also serving in both the Atlantic and Pacific Fleets. After retring from active duty, Deutermann moved to Georgia to work on his writing career. He published his first fiction novel, entitled Scorpion in the Sea, in 1992 through the George Mason University Press. The book landed him an agent, and then a contract with St. Martin's Press in 1993. Three of his later books have been optioned for feature film development.