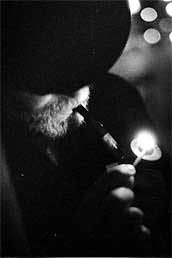 James Church is the pseudonym of the author of the detective novels featuring a North Korean policeman, "Inspector O". Church is identified on the back cover of his novels as "a former Western intelligence officer with decades of experience in Asia". He grew up in the San Fernando Valley in the United States and was over 60 years old in 2009. His "Inspector O" novels have been well-received, being noted by Asia specialists for offering "an unusually nuanced and detailed portrait" of North Korean society. A Korea Society panel praised the first book in the series for its realism and its ability to convey "the suffocating atmosphere of a totalitarian state". A panelist as well as The Independent's and the Washington Post's reviewers compared the protagonist to Arkady Renko, the Soviet chief inspector in Martin Cruz Smith's Gorky Park, for providing "a vivid window into a mysterious country".