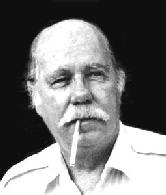 aka Will Charles, W Franklin Sanders
Charles Willeford was orphaned before he knew the difference, and spent the remainder of his childhood between boarding schools and his Grandmother's house. By the time he was fifteen, he was living as a hobo and riding the freight trains that crossed the Southern states. He joined the army and went to war, he was alarmed at the psychopaths and criminals that also joined and pointlessness of war. He remained in the army and started to write poetry. He wrote 18 novels, some under his pseudonym Will Charles, before he died in 1988.

Plays
The Ordainment of Brother Springer (2009)