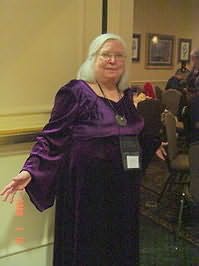 (b.1933)
Juanita Coulson is an American science fiction and fantasy writer. She is also widely known in filk music circles since the 1950s for her singing and songwriting; she has won several Pegasus Awards for her filking. For thirty-three years, she co-edited the science fiction fanzine Yandro with her husband "Buck" (Robert Coulson). Yandro was nominated for a Hugo Award every year from 19581967; it won the award in 1965, thus marking Coulson as one of the very first women to be so honored.