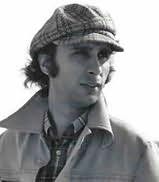 (b.1946)
John DeChancie is the author of over two dozen books, fiction and nonfiction, and has written for periodicals as widely varied as Penthouse and Cult Movies. His novels in the science fiction and fantasy genres have been attracting a wide readership for more than fifteen years, and over a million copies of his books have seen print, many in foreign languages.

His humorous fantasy series, beginning with Castle Perilous, became a best seller for Berkley/Ace. William Morrow published MagicNet, which Booklist said was "a welcome sigh of comic relief ... shamelessly droll, literate, and thoroughly entertaining. Magicnet is the fantasy genre's whimsical answer to Neuromancer." He has also written in the horror genre. His short fiction has appeared in The Magazine of Fantasy and Science Fiction and in numerous original anthologies, the latest of which is Spell Fantastic. His story collection, Other States of Being, was recently published by Pulpless.com, Inc., an online and print-on-demand publisher.

Castle Falkenstein
From Prussia with Love (1995)
Masterminds of Falkenstein (1996)

Split Heirs (1993)
Esther Friesner and Lawrence Watt-Evans
"If Robert Benchley and Dorothy Parker had teamed up to write epic fantasy, something like