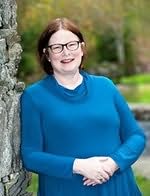 aka Sarah Atwell
Sheila Connolly was the Anthony and Agatha Award-nominated author of over thirty titles, including the Museum Mysteries, the Orchard Mysteries, and the County Cork Mysteries, in addition to the Relatively Dead paranormal romance e-series, the standalone books Once She Knew, a romantic suspense, and Reunion with Death, a traditional mystery set in Tuscany, as well as a number of short stories in various anthologies.

Murder, She Barked (2013)
(Paws and Claws Mystery, book 1)
Krista Davis
"Davis has created a town that any pet would love—as much as their owners do. And they won’t let a little thing like murder spoil their enjoyment."

Rebel Without a Cake (2014)
(Piece of Cake Mystery, book 5)
Jacklyn Brady
"Brady's writting is smooth as fondant, rich as buttercream."

Off Kilter (2014)
(Scottish Highlands Mystery, book 1)
Hannah Reed
"Hannah Reed's series debut captures the appeal of the Highlands, and features a plucky, determined heroine surrounded by a cast of quirky but believable characters."

Below the Tree Line (2018)
(Pioneer Valley Mystery, book 1)
Susan Oleksiw
"Oleksiw crafts a classic small-town mystery . . . where a closely knit cast of characters are forced to wrestle with the unwanted intrusion of the modern world that threatens long-standing traditions."