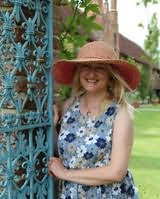 Victoria Connelly is the bestselling author of the Austen Addicts series about fans of Jane Austen: A Weekend with Mr Darcy, The Perfect Hero ('Dreaming of Mr Darcy' in the US), Mr Darcy Forever, Christmas with Mr Darcy and Happy Birthday Mr Darcy.

Her books have been translated into many languages including three magical romances published in Germany. The first, Flights of Angels, was made into a film. Victoria and her husband flew out to Berlin to see it being filmed and got to be extras in it.

She is also the author of several romantic comedies including The Runaway Actress which was nominated for the Romantic Novelists' Association's Best Romantic Comedy of the Year.

Victoria was brought up in Norfolk before moving to Yorkshire where she got married in a medieval castle. After 11 years in London, she moved to rural Suffolk where she lives in a Georgian cottage with her artist husband, a Springer spaniel and her ex-battery hens. She's written about her experience of country life in two volumes of autobiography, Escape to Mulberry Cottage and A Year at Mulberry Cottage.