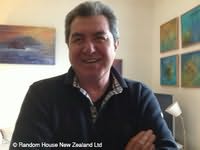 (b.1950)
Alan Duff (born October 26, 1950, Rotorua, New Zealand) is a New Zealand novelist and newspaper columnist, most well known as the author of Once Were Warriors. He began to write full-time in 1985.

He tried writing a thriller as his first novel, but it was rejected. He burned the manuscript and started writing Once Were Warriors, which had an immediate and great impact. The novel is written in juxtaposed interior monologues, making its style stand out from other works. It was winner of the PEN Best First Book Award, was runner-up in the Goodman Fielder Wattie Award, and was made into the award-winning film of the same name in 1994.

Another of his novels, One Night Out Stealing, appeared in 1991 and shortlisted in the 1992 Goodman Fielder Wattie Book Awards.

He was also awarded the Frank Sargeson Fellowship in 1991, and began writing a weekly -- later bi-weekly column for the Evening Post (Wellington newspaper), syndicated to eight other newspapers. In this, and in his 1993 analysis, Mori: The Crisis and the Challenge, he has developed his ideas on the failures of Moridom, castigating both the traditional leadership and the radical movement for dwelling on the injustices of the past and expecting others to resolve them, instead of encouraging Mori to get on and help themselves. The blame for Mori underperformance he puts squarely back on Mori, for not making the most of the opportunities given them. This somewhat simplistic message has proved highly controversial.