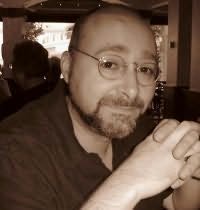 aka Cris Ramsay
Aaron S. Rosenberg is an American novelist and game designer.Originally from New Jersey and New York, Rosenberg returned to New York City in 1996 after stints in New Orleans and Kansas. He has taught college-level English and worked in corporate graphics and book publishing.

Rosenberg has written novels for Star Trek, StarCraft, WarCraft, Exalted, and Warhammer. He also writes educational books, children's books, and roleplaying games. He won an Origins Award in 2003 for Gamemastering Secrets, a Gold ENnie in 2007 for Lure of the Lich Lord, and a 2003 PsiPhi Award for Collective Hindsight, Book One. Rosenberg lives in New York City with his family.