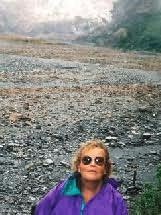 (1943 - 2017)
Grania Davis grew up in Milwaukee and Hollywood, California, and lived and worked at various times in bustling New York; on the slopes of volcanoes in Amecameca, Mexico and in Rotorua, New Zealand; on a sandbar in Belize; in a Tibetan refugee settlement in the Indian Himalayas; near neon-lit Tokyo, where she worked as a military historian; and at the beach on North Shore, Oahu, Hawaii, where she graduated from the University of Hawaii.
Novels
Proud Peacock and the Mallard (1976)
Doctor Grass (1978)
The Great Perpendicular Path (1980)
The Rainbow Annals (1980)
The King and the Mangoes (1983)
Moonbird (1986)
Marco Polo and the Sleeping Beauty (1988) (with Avram Davidson)
The Boss in the Wall (1998) (with Avram Davidson)