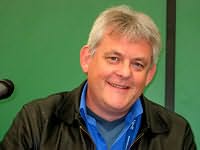 (1956 - 2016)
Joe Dever was an award-winning British fantasist and game designer. Originally a musician, Dever became the first British winner of the Advanced Dungeons and Dragons Championship of America in 1982.

He created the fictional world of Magnamund as a setting for his Dungeons and Dragons campaigns. In 1984 he released the first book of the Lone Wolf series of young-adult gamebooks, and the series has since sold over 9 million copies worldwide. He experienced difficulty with his publishers as the game books market began to contract in 1995, until publication ceased in 1998 before the final four books were released.

Graphic Novels
The Skull of Agarash (1994)