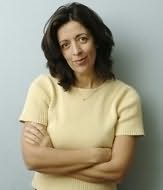 (b.1963)
Louise is a novelist, playwright and cultural commentator. She is the author of seven books. Her first novel, Crazy Paving was published in 1995 and shortlisted for four awards including the John Llewellyn Rhys Prize. Her fourth novel Fires in the Dark, published in 2003 to international critical acclaim, was the first of two historical novels about Romany history and set in central Europe during the Second World War. It was followed by Stone Cradle in 2006, which was about her own English Romanichal ancestors.

She has also written one work of non-fiction, A Novel in a Year, a how-to-write book based on her highly popular newspaper column. Doughty has also published short stories and written five plays for radio, the first of which, Maybe, won a Radio Times Drama Award. She has worked widely as a critic and broadcaster in the UK, including a spell as the presenter of Radio 4's A Good Read, and was a judge for the 2008 Man Booker Prize for fiction.

The Heat of Betrayal (2015)
Douglas Kennedy
"A gripping thriller, this book poses a universal question: how far are we prepared to go in pursuit of the truth, and do we really want the answers when we find them?"

What's Left of Me Is Yours (2020)
Stephanie Scott
"A brilliant debut."

Summerwater (2020)
Sarah Moss
"Summerwater is a beautiful book, written with delicacy and grace, yet with an undertow as dark as the Scottish loch by which its characters are holidaying in ignorance of the tragedy to come. If you are a huge fan of Moss's work, as I am, you will find yourself parceling it out, to read a chapter a day, like a gift."
Visitors to this page also looked at these authors
Sabine Durrant
Samantha Downing
Louise Candlish
Clare Mackintosh
Teresa Driscoll
Robert Dugoni
Paula Daly
J P Delaney
Jeffery Deaver
Nelson DeMille
Helen Dunmore
Christina Dodd
Anthony Doerr
Eva Dolan
Lucy Foley
B A Paris