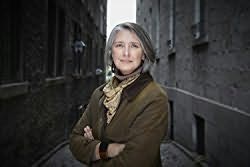 Canada (b.1958)
Louise Penny is the author of the #1 New York Times and Globe and Mail bestselling series of Chief Inspector Armand Gamache novels (Still Life, A Fatal Grace, and The Cruelest Month). She has won numerous awards, including a CWA Dagger and the Agatha Award (six times), and was a finalist for the Edgar Award for Best Novel. In 2017, she received the Order of Canada for her contributions to Canadian culture. Louise lives in a small village south of Montréal.

The Crossing Places (2009)
(Ruth Galloway Mystery, book 1)
Elly Griffiths
"Forensic archeologist and academic Ruth Galloway is a captivating amateur sleuth-an inspired creation. I identified with her insecurities and struggles, and cheered her on."

The Witch of Babylon (2011)
(Mesopotamian Trilogy, book 1)
D J McIntosh
"Ancient history and alchemy combine to terrorize us in this stunning historical thriller. A terrific read."

The Quality of Silence (2015)
Rosamund Lupton
"A taut psychological thriller ... The Quality of Silence will have your heart thumping. Lupton’s masterful pacing, riveting plotting, and keen understanding of grief make her a winning rival of Tana French and Val McDermid. Absolutely gripping."

In Farleigh Field (2017)
(Rhys Bowen WW Collection, book 1)
Rhys Bowen
"In Farleigh Field is brilliant. The plotting is razor sharp and ingenious, the setting in World War Two Britain is so tangible it’s eerie. The depth and breadth of character is astonishing. They're likeable and repulsive and warm and stand-offish. And oh, so human. And so relatable. All this would be enough to propel In Farleigh Field to the top of your favourites list, but what truly distinguishes this book, indeed all her books, is the quality of writing. Rhys Bowen is one of the very best fiction writers of the day. With a deep understanding of the wounded human heart, and an uncanny ability to capture the quiet emotions and the grand scale of war, she rises above her contemporaries. This is magnificently written and a must read."

Go to my Grave (2018)
Catriona McPherson
"Atmospheric, with mind-bending twists, a narrator who may or may not be reliable, and an ending that will take your breath away."

The President is Missing (2018)
Bill Clinton and James Patterson
"The President Is Missing is heart-pounding, gripping, terrifying... a genuinely masterful thriller. My knuckles are still white!"

The Escape Room (2019)
Megan Goldin
"Amazing...a thriller set in an elevator [that explores] the vast territory of people's worst natures. A nightmarish look inside ourselves. Simply riveting."