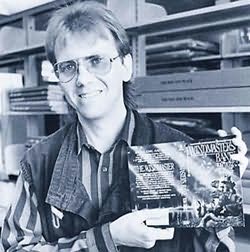 (1952 - 2009)
Thomas Franklin Deitz was an American novelist from Georgia. He had a B.A. and M.A. in medieval English from University of Georgia. He was the author of the Soulsmith Trilogy, comprising of the books Soulsmith, Dreambuilder, and Wordwright. He also wrote a popular series consisting of Windmaster's Bane, Fireshaper's Doom, Darkthunder's Way, Sunshaker's War, Stoneskin's Revenge, and The Gryphon King.

Deitz also recently won the Phoenix Award (2007). This award is given at the annual DeepSouthCon to a professional who has done a great deal for Southern Fandom.