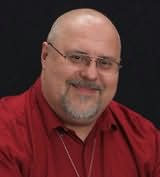 (b.1952)
David Mark Weber is an American science fiction and fantasy author. He was born in Cleveland, Ohio and now lives in South Carolina.
Many of his stories have military, particularly naval, themes, and fit into the military science fiction genre. He frequently places female leading characters in what have been traditionally male roles.
One of his most popular and enduring characters is Honor Harrington whose alliterated name is an homage to C. S. Forester's character Horatio Hornblower and her last name from a fleet doctor in Patrick O'Brian's Master and Commander. Her story, together with the "Honorverse" she inhabits, has been developed through 13 novels and four shared-universe anthologies

Worlds of Weber
Ms. Midshipwoman Harrington and Other Stories (2008)

Collections
The Warmasters (2002) (with David Drake and Eric Flint)

Wolf's Head, Wolf's Heart (2002)
(Firekeeper Saga, book 2)
Jane Lindskold
"What do you get when you mix lost magic and feral children with dynastic politics, wolf social dynamics, treason, and overambitious, social-climbing parents? You get Jane Lindskold's new novel Through Wolf's Eyes and another stay-up-to-finish-the-last-page read."

Black Powder War (2006)
(Temeraire, book 3)
Naomi Novik
"Naomi Novik has done for the Napoleonic Wars what Anne McCaffrey did for science fiction: constructed an alternate reality in which dragons are real in a saga that is impressively original, fully developed, and peopled with characters you care about."

Unbreakable (2015)
(Chronicles of Promise Paen, book 1)
W C Bauers
"Bauer puts together characters who take up residence in your heart, the cold-blooded politics of the 'Great Game, ' the power of devotion and loyalty, and the human cost carnage extracts from even the most courageous. I highly recommend it."

The Aeronaut's Windlass (2015)
(Cinder Spires, book 1)
Jim Butcher
"This is Jim Butcher at his best, drawing a fully realized, richly detailed, and downright fun literary world where fearless aeronauts ride the aether, brilliant wizards struggle with doorknobs, and a thirty-pound feline warrior keeps a pet human named Little Mouse. It’s steampunk meets magic with a dose of sci-fi for seasoning. Buy it and read it. You’ll be glad you did."

Common Source (2020)
(John Simon, book 3)
Bryan Thomas Schmidt
"If Ed McBain had written science fiction, the John Simon series would be it. It's that good."