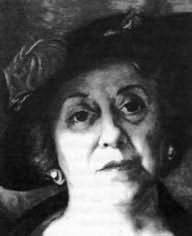 (1879 - 1969)
Inglis Clark Fletcher was widely traveled, but the home of her maternal ancestors coastal North Carolina provided the stuff of her successful fiction and the home of her later years. The eldest of three children, Fletcher grew up in Edwardsville, Illinois, a small town populated by many displaced Southerners. As a child she preferred reading, debating, and writing novels to other pastimes, but it was her drawing talent that sent her to study as a teenager at the St. Louis School of Fine Arts at Washington University. Fletcher displayed some aptitude, but frankly said she was more interested in marriage than sculpture.

Her marriage to a mining engineer sent her directly to some of the roughest of the mining camps in California, Nevada, Colorado, and Alaska. Like many pioneer women isolated on male-dominated frontiers, Fletcher turned to writing as a way of coming to terms with experience. She sold film synopses and wrote poetry, articles, and reviews. When the Fletcher family moved to Oakland (1911) and San Francisco (1925-38), Fletcher found she enjoyed running a lecture bureau. In 1944 the Fletchers moved to historic Bandon Plantation, near Edenton, North Carolina. When Bandon burned in 1963, Fletcher retired to Charleston, South Carolina.