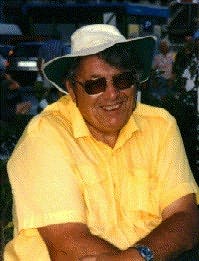 (b.1939)
James Follett was born in 1939. He was blinded in an accident as a child but his sight was restored in his early teens. After a period spent filming sharks, hunting for underwater treasure and writing for the Ministry of Defence, he became a full time writer in 1976.

Since then he has written 25 novels, among them the successful thriller MIRAGE, and THE TIPTOE BOYS, filmed as WHO DARES WINS; over 50 radio scrips, and a number of TV scripts including episodes of BLAKE'S 7. His books have been translated into 11 languages and he is one of the few British authors whose novels are published in China.He was the creater of BBC Radio 4's widely acclaimed Sci-Fi serial EARTHSEARCH, and has recentley completed his SILENT VULCAN trilogy and his 'Eagles' trilogy.

&#160For 11 years has been in the public lending right's top two bands of authors of most-borrowed books from libraries. His interests include amateur radio: callsign G1LXP.He suffered a stroke in December 2006 which left him unable to walk - an ability he regained by mid-2007 after intensive physiotherapy.
Series
Earthsearch
1. Earthsearch (1981)
2. Deathship (1982)
3. Mindwarp (1994)