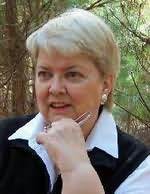 Born and raised in central North Carolina, Margaret Maron lived in Italy before returning to the USA where she and her husband now live. In addition to a collection of short stories she's also the author of 16 mystery novels. Her works have been translated into seven languages her Bootlegger's Daughter, a Washington Post Bestseller won Edgar Anthony, Agatha, and Macavity awards. She is a past president of Sisters in Crime and of the American Crime writers' league, and a director on the national board for Mystery Writers of America.

Grizzly (1994)
(Lee Squires, book 2)
Christine Andreae
"Christine Andreae writes about Montana's wilderness with the grace and sensitivity of a poet. Grizzly blends mystery with ecology, then wrenches us with the dwindling of Earth's less-cuddly species-both ursine and human."

The Death We Share (1995)
(Patricia Delaney, book 3)
Sharon Short
"Hercule Poirot, Private Inquiry Agent, used to boast of his 'leetle gray cells.' Patricia Delaney, Investigative Consultant, uses the electronic bytes in her 'little gray box' to solve her cases with equal efficiency and flair. But computers never replace compassion and it's a pleasure to watch Delaney at work."

Death in Little Tokyo (1996)
(Ken Tanaka, book 1)
Dale Furutani
"The premise for Death in Little Tokyo is that mystery enthusiast Ken Tanaka belongs to the L.A. Mystery Club and he's setting up a role-playing mystery for the group, in which he plays a hard-boiled P.I. When a beautiful woman hires him as a go-between, he immediately assumes someone is playing a joke. Unfortunately, the murder that follows is no joke. Good local color and interesting details about modern Japanese-American customs and rituals."

Dead March (1998)
(Civil War, book 1)
Ann McMillan
"What an intriguing trio! I do hope they're enlisted for the duration."

Whose Death is It, Anyway? (1998)
(Peaches Dann, book 4)
Elizabeth Daniels Squire
"Peaches Dann is one peach of a sleuth!"

Click Here For Murder (2003)
(Turing Hopper, book 2)
Donna Andrews
"Rarely have I been charmed by a new series character as I am by Turing Hopper."

Swift Justice (2010)
(Charlie Swift , book 1)
Laura DiSilverio
"I thoroughly enjoyed meeting soft-boiled private eye, Charlotte Swift. With believable credentials (ex-Air Force, Office of Special Investigations), Charlie's tricky case is lightened by the Humvee-driving abandoned wife of Charlie's ex-partner, a heretofore 'spa-to Saks-to-dinner party' matron, who has decided she wants to be a PI. Swift Justice is a delightfully sure-footed mixture of light and dark, and it signals the debut of a solid series."

These Dark Things (2011)
(Captain Natalia Monte, book 1)
Jan Merete Weiss
"When Jan Merete Weiss's Captain Natalia Monte investigates the murder of a beautiful young university student, she must thread an uneasy path between childhood loyalties, religious superstition, corrupt officials, growing piles of garbage, and warring factions of an entrenched Camorra. Weiss has done her homework, walked the pestilent streets, prowled the catacombs below the city, and created a thoroughly human woman who will do what she must to protect her part of a city that both enchants and infuriates her."

Phony Tinsel (2013)
Robert S Levinson
"A delightfully improbable romp through 1938 Hollywood with all the usual Levinson wit and humor."

Winter at the Door (2015)
(Lizzie Snow Mystery, book 1)
Sarah Graves
"Sarah Graves writes with grace and intelligence, and a love for her state shines through in this stylish debut of a new series set against Maine’s dark and foreboding forests. I’m hooked!"

The Man On the Washing Machine (2015)
(Theo Bogart Mystery, book 1)
Susan Cox
"Sue Cox writes with deft assurance. An appealing cast of characters and an absorbing plot that kept me turning the pages."