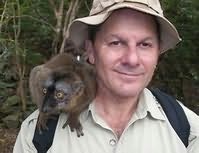 (b.1946)
Alan Dean Foster has written in a variety of genres, including hard science fiction, fantasy, horror, detective, western, historical, and contemporary fiction. He is also the author of numerous nonfiction articles on film, science, and scuba diving, as well as novelizations of several films, including Star Wars, the first three Alien films, and Alien Nation. His novel Cyber Way won the Southwest Book Award for Fiction in 1990, the first science fiction work ever to do so.

Foster's love of the far-away and exotic has led him to travel extensively. He's lived in Tahiti and French Polynesia, traveled to Europe, Asia, and throughout the Pacific, and has explored the back roads of Tanzania and Kenya. He has rappelled into New Mexico's fabled Lechugilla Cave, panfried piranha (lots of bones, tastes a lot like trout) in Peru, white-water rafted the length of the Zambezi's Batoka Gorge, and driven solo the length and breadth of Namibia.

Foster and his wife, JoAnn Oxley, reside in Prescott, Arizona, in a house built of brick that was salvaged from a turn-of-the-century miners' brothel. He is presently at work on several new novels and media projects.

Chapbooks
The Horror on the Beach (1978)