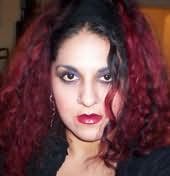 (b.1969)
Rhiannon Frater was born and raised a Texan. Though she has lived in various towns all over the state, she finally settled in Austin, Texas where she met her husband and worked as a governmental consultant.
During her travels for her job, she was inspired to write the story of two women fleeing into the Texas Hill Country in an attempt to survive the zombie apocalypse. Originally published as a serial online under the title AS THE WORLD DIES, she later self-published the series in three novels to satisfy the many fans of the story. The first novel in the series, THE FIRST DAYS, won the 2008 Dead Letter Award for Best Book (Fiction). The second book, FIGHTING TO SURVIVE won the 2009 Dead Letter Award in the same category. She is also the author of THE LIVING DEAD BOY AND THE ZOMBIE HUNTERS, PRETTY WHEN SHE DIES: A Vampire Novel and two novels in the Vampire Bride Series (THE TALE OF THE VAMPIRE BRIDE and THE VENGEANCE OF THE VAMPIRE BRIDE). All her works have been optioned for either TV or film.

Rhiannon continues to live in Austin, Texas with her husband and is now a full-time writer.
She is represented by Hannah Gordon of the Foundry Literary Media agency.

In Darkness We Must Abide