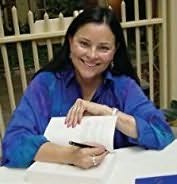 (b.1952)
Diana Gabaldon is the author of the international bestsellers CROSS STITCH, DRAGONFLY IN AMBER, VOYAGER, DRUMS OF AUTUMN and THE FIERY CROSS - all featuring Claire and Jamie Fraser. Although American by birth, Diana has become fascinated by the history of Scotland, England, France and the USA in the mid-18th century when the struggles that would determine the shape of the modern world were taking place. She lives in Scottsdale, Arizona, with her husband and their children.

Non fiction
Outlander Kitchen: To the New World and Back (2020) (with Theresa Carle-Sanders)

The Oracle Glass (1994)
Judith Merkle Riley
"Open the pages, and out comes a whiff of brimstone, as The Oracle Glass transports you to the Paris of kings and witches, on a guided tour of corruption, love, and sorcery."

Uther (2000)
(Camulod / Legends of Camelot, book 7)
Jack Whyte
"From the building blocks of history and the mortor of reality, Jack Whyte has built Arthur's world and showed us the bone beneath the flesh of legend."

The Merlin of the Oak Wood (2001)
(Joan of Arc Tapestries, book 2)
Ann Chamberlin
"Wonderful! Every word is - literally - magic."

Lake in the Clouds (2002)
(Wilderness , book 3)
Sara Donati
"One of those rare stories that lets you breath the air of another time."

The Scent of Shadows (2007)
(Sign of the Zodiac, book 1)
Vicki Pettersson
"From the one-damn-thing-after-another school of unputdownable books, The Scent of Shadows rockets into the air and explodes like fireworks, with nonstop bursts of action and imagination."

Nefertiti (2007)
(Egyptian Royals Collection, book 1)
Michelle Moran
"Nefertiti is a fascinating window into the past, a heroic story with a very human heart. Compulsively readable!"

The Spymaster's Lady (2008)
(Spymaster's Lady, book 1)
Joanna Bourne
"What a terrific story! One of the most unusual, resourceful, and humerous heroines I've ever met."

The Darling Strumpet (2011)
Gillian Bagwell
"[A] richly engaging portrait of the life and times of one of history's most appealing characters!"

Moonglow (2012)
(Darkest London, book 2)
Kristen Callihan
"Callihan has a great talent for sexual tension and jaw-dropping plots that weave together brilliantly in the end."

In a Fix (2012)
(Ciel Halligan, book 1)
Linda Grimes
"A fast-paced, sexy romp with characters as original as its intriguing premise!"

Plague (2014)
(Captain Coke, book 1)
C C Humphreys
"Plague is one of those books where you turn the last page and wish there were more. The very best of history, mystery, romance and sheer fun. (Well, and a few rats...) London itself is as vivid a character as the actors, adventurers and intriguers who people its all-too-few pages."

Finding Fraser (2015)
kc dyer
"Jamie Fraser would be Deeply Gratified at having inspired such a charming funny, poignant story-and so am I."

The Survivors (2015)
(Cal Henderson, book 1)
Robert Palmer
"The best suspense suspense I've read this year it will haunt you."

Into the Dim (2016)
(Into the Dim, book 1)
Janet B Taylor
"Instantly engaging, constantly suspenseful, ultimately poignant and satisfying."

The Vineyard (2017)
María Dueñas
"Evocative, tender, and lush; a wonderful experience of times and lives in turmoil."

Creatures of Will & Temper (2017)
(Creatures , book 1)
Molly Tanzer
"An artful, witty, Oscar Wilde pastiche with the heart of a paranormal thriller."

Second Lady (2018)
Jeanette Baker
"Wonderful...It grips from the first page to the last."

Bellewether (2018)
Susanna Kearsley
"I've loved every one of Susanna's books! She has bedrock research and a butterfly's delicate touch with characters—sure recipe for historical fiction that sucks you in and won't let go!"

Death of an Eye (2018)
(Eye of Isis, book 1)
Dana Stabenow
"For those who like books with rich settings, engaging characters, strong women and hot sex on occasion...let me recommend Dana Stabenow."

Chosen Ones (2020)
Veronica Roth
"A hugely-imagined, twisty, turning tale that leads through the labyrinths of magic and war to the center of the heart."