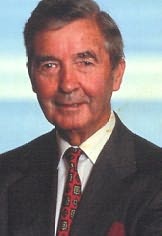 Wales (1920 - 2010)
Dick Francis is widely acclaimed as one of the world's finest thriller writers. His awards include the Crime Writers' Association's Cartier Diamond Dagger for his outstanding contribution to the crime genre, and an honorary Doctorate of Humane Letters from Tufts University of Boston. In 1996 Dick Francis was made a Mystery Writers of America Grand Master for a lifetime's achievement and in 2000 he received a CBE in the Queen's Birthday Honours list.