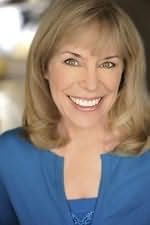 aka Avery Aames
Daryl Wood Gerber is the author of A Cookbook Nook Mystery series, featuring an avid reader, admitted foodie, and owner of a cookbook store in picturesque coastal California.
Prior to her career as a novelist, Daryl wrote screenplays and created the format for the popular TV sitcom Out of this World. A fun tidbit for mystery buffs, Daryl was also an actress and co-starred on "Murder, She Wrote", as well as other TV shows. Daryl is originally from the Bay Area and graduated from Stanford University. She loves to cook, read, golf, swim, and garden. She also likes adventure and has been known to jump out of a perfectly good airplane. She is happily married ,they have a grown son who has flown the coop.

Omnibus
Mistletoe and Murder (2019) (with Victoria Hamilton and Gail Oust)

By Book Or By Crook (2015)
(Lighthouse Library Mystery, book 1)
Eva Gates
"This is a first-rate cozy mystery featuring a spunky librarian, a captivating book collection, an intriguing lighthouse, and plenty of twists and turns to keep you reading until dawn."

Assault and Pepper (2015)
(Spice Shop Mysteries, book 1)
Leslie Budewitz
"There's a savvy new amateur sleuth in town, and her name is Pepper Reece. Assault and Pepper is a smart blend of zesty characters, piquant spices, and scrumptious food. Set against the intriguing Seattle backdrop, this well-plotted whodunit is the perfect recipe for a great read."

The Cracked Spine (2016)
(Scottish Bookshop Mystery , book 1)
Paige Shelton
"With a wee bit of the brogue, Paige Shelton weaves a Scottish tale of mystery and intrigue filled with a quirky cast of characters, including the clever Delaney Nichols, an American fish-out-of-water who believes in the magic of books. You will want to make repeat visits to The Cracked Spine."