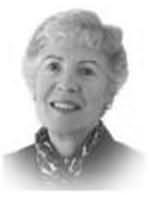 aka Grace Reid
Grace was born on 1934 in the Highlands of Scotland, and grew up on a farmin the Scottish northeast. As an eleven year old, Grace earned her veryfirst paycheck by gathering potatoes during the school holidays --"tattie-howking" as it was locally known; back-breaking work as it wasgenerally acknowledged! Then, earnings in hand, she cycled to Elgin, anearby town, and with the precious pound bought a shiny black Watermanfountain pen. She had always loved writing, and with the treasured pen shecontinued to write...diaries, letters, and poetry...and fan mail to farawaymovie stars living at, what seemed to be, a very romantic address: CulverCity, California, USA.

Married with children, little did Grace dream that just over two decadeslater, she would move to North America with her family and eventually settlein Vancouver, Canada. And there she read a newspaper article about a popularHarlequin romance author. Until then, she had always believed writers to beextraordinary people, who lived in ivory towers, and she had considered itwould be presumptuous for any ordinary person to aspire to become one. Butthe author in the article appeared much like herself... a housewife, amother, and Scottish to boot. So should she give it a shot? Having alwaysenjoyed writing and always enjoyed a challenge, Grace decided she wouldwrite romance novels. And after a five-year period of hard work and severalrejections -- which she likes to think of as a five-year apprenticeship -- shefinally made the first of many sales in 1988 as Grace Reid and later asGrace Green.