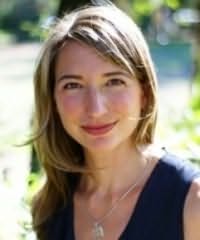 (b.1971)
Michelle Gagnon is a former modern dancer, dog walker, bartender, freelance journalist, personal trainer, model, and Russian supper club performer. To the delight of her parents, she eventually gave up all these jobs for an infinitely more stable and lucrative position as a crime fiction writer.

Her debut thriller THE TUNNELS was published in the United States and Australia, and was an IMBA bestseller. Described as "Silence of the Lambs meets The Wicker Man," the story involves a series of ritualized murders in the abandoned tunnel system beneath a university.

The following book in the series, BONEYARD, depicts a cat and mouse game between dueling serial killers in the Berkshires.

In her spare time she runs errands and indulges a weakness for stale cinema popcorn and Hollywood blockbusters. Hopelessly addicted to Scrabulous, she's seriously considering a twelve-step program. She lives in San Francisco with her family.