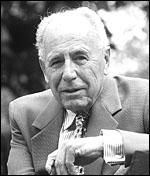 (1920 - 2004)
Arthur Hailey was born in England and began his writing career while an RAF pilot during the Second World War. After the war he lived and wrote in Canada, becoming a Canadian citizen as well as British; he also lived briefly in the United States. For the past twenty-six years Arthur Hailey and his wife Sheila have made their home in the Bahamas. Hailey's novels include the bestselling Hotel, Strong Medicine, Airport, In High Places, The Final Diagnosis and Detective and have been published in thirty-nine languages; an estimated 160 million copies are in print worldwide. Most of his books have been made into films or TV series.

The Takeover (1973)
Niven Busch
"As up to date as this morning's headline news. A fast-paced, spellbinding story, Niven Busch's finest book so far."