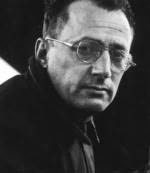 (1909 - 1981)
orn of Swedish-immigrant parents, Nelson Ahlgren Abraham moved at an early age from Detroit to Chicago. At Illinois University he studied journalism. His experiences as a migrant worker during the Depression provided the material for his first novel Somebody in Boots (1935). Throughout his life Algren identified with the American underdog. From 1936 to 1940 (the highpoint of left-wing ideas on the US literary scene) he was editor of the Illinois Writers' Project. In 1942, after putting the finishing touches to his second novel, he joined the war as an enlisted man. Never Come Morning received universal acclaim, and eventually sold over a million copies.

Algren's style is a dark naturalism that passionately records the details of trapped urban existence with flashes of melancholy poetry. His characters are the lowlife drifters, whores, junkies and barflies of poverty row. He records the bravado of their colloquial language and lays their predicament bare.
Novels
Somebody in Boots (1935)
Never Come Morning (1942)
The Man with the Golden Arm (1949)
A Walk on the Wild Side (1956)
The Devil's Stocking (1983)