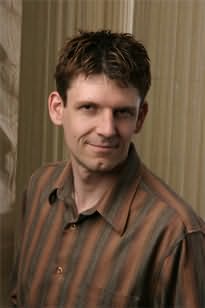 aka Benjamin Tate
Joshua Palmatier was born in Coudersport, PA, but since his father was in the military he moved around. Alot. He's lived in the states of Pennsylvania (three times), Florida (twice), Washington, California (briefly), Virginia, Texas (twice), and now resides in upstate New York. He has spent the majority of his life so far going to school, earning a Bachelors of Science and a Master of Arts degree in mathematics from the Pennsylvania State University, followed by a PhD in mathematics from Binghamton University. He is currently teaching mathematics (what else) at the State University of New York--Oneonta, taught for two years at Lock Haven University of Pennsylvania, and taught for three years at Bloomsburg University while taking a break between his masters degree and the PhD.

Collections
Cocoon and An Alewife In Kish (2019)