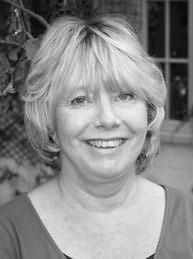 Mary Hooper has been writing professionally for over twenty years. She left school at fifteen with no qualifications and worked as a secretary for some years before marrying and having two children, Rowan and Gemma, both now grown up. She took an English degree at Reading University as a mature student, graduating in 1990. Her first experience of writing success was in the magazine world; she had hundreds of short stories and serials published in teenage and women's titles. After this she was inspired to create something more permanent for the bookshelves and so wrote a stream of humorous and realistic teenage novels, plus a batch for younger readers, their amusing style highlighted by both the Revolting Bridesmaid and the Two Naughty Angels series.

She is now working on a series set round and about the Tudor Court and featuring a maid, Lucy, who works at the house of Dr Dee, Queen Elizabeth's magician.

Mary describes her hobbies as "pottering around, doing things with dried flowers, painting furniture and moving pictures around on walls." She lives in a cottage in Henley-on-Thames, Oxfordshire, where all her hobbies are indulged!