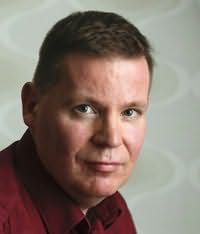 (b.1966)
Pekka Hiltunen is an author and journalist living in Helsinki. He works as the managing editor at the Mondo magazine.
Hiltunen was nominated for the Helsingin Sanomat Literature Prize for debut novelists, and was awarded the Kaarle Prize for 2012, the Clue of the Year Prize in 2012 and the Laila Hirvisaari Prize in 2012. He was also awarded the Writing Editor prize for 2010 and nominated for the Scandinavian Glass Key Prize 2013. One of Pekkas literary role models is Peter H&#248eg, especially Miss Smillas Feeling for Snow.
Publishing rights in Pekka Hiltunen's psychological thriller Cold Courage (2011), which started his Studio-series, have been sold to seven countries. The second novel in the series, Black Noise (2012), got also excellent reviews and is being translated to English, German and Czech languages. Hiltunen writes also general fiction; his third book BIG, a novel on obesity, was published with enormous media buzz in Finland in 2013.
Series
Studio
1. Cold Courage (2013)
2. Black Noise (2014)