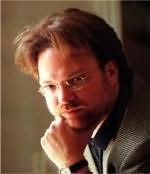 (b.1960)
Greg Iles was born in Germany, where his father ran the US Embassy Medical Clinic during the height of the Cold War. He spent his youth in Natchez, Mississippi, and graduated from the University of Mississippi in 1983. His first novel, Spandau Phoenix, a thriller about Nazi war criminal Rudolf Hess, was published in 1992 and became a New York Times bestseller.

The Skull Mantra (1998)
(Shan Tao Yun Mystery, book 1)
Eliot Pattison
"The Skull Mantra is an incandescent thriller, a compelling, lyrical journey through the harsh, beautiful world of Tibet. Pattison has made his mark the first time out."

The Piper's Sons (1999)
Bruce Fergusson
"You'll be up all night unearthing the secrets buried in The Piper's Sons, and Fergusson makes the digging a pleasure... A powerful debut that will stay with you long after you close the book."

Thriller (2006)
James Patterson
"Thriller will be a classic. This first-ever collection of thriller stories, from the best in the business, has it all. The quality blew me away."