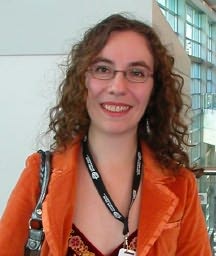 (b.1973)
Naomi Novik was born in New York in 1973, a first-generation American, and raised on Polish fairy tales, Baba Yaga, and Tolkien. She studied English Literature at Brown University and did graduate work in Computer Science at Columbia University before leaving to participate in the design and development of the computer game Neverwinter Nights: Shadows of Undrentide. Over the course of a brief winter sojourn working on the game in Edmonton, Canada (accompanied by a truly alarming coat that now lives brooding in the depths of her closet), she realized she preferred the writing to the programming, and, on returning to New York, decided to try her hand at novels. Temeraire is her first.

Naomi lives in New York City with her husband and six computers.

Liberty Vocational
1. Will Supervillains Be on the Final? (2011)

Collections
Golden Age and Other Stories (2017)

Black Ships (2008)
(Numinous World, book 1)
Jo Graham
"Haunting and bittersweet, lush and vivid, this extraordinary story has lived with me since I first read it."