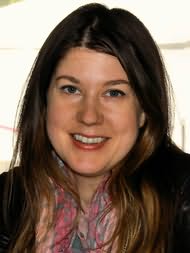 (b.1973)
Maureen Johnson was born in Philadelphia, Pennsylvania. Like a lot of people who end up writing books, she was always reading. This paid off in the end, but also resulted in her not playing any sports, so she is spectacularly uncoordinated, and is easily injured by harmless household objects, like endtables.

She studied writing and theatrical dramaturgy at Columbia University. Before she could spend all her days writing, Maureen served up hamburgers in the company of mad scientists and talking skeletons in New York, tended bar in Piccadilly Circus, nervously worked alongside live tigers in Las Vegas, and once got mixed up with the entire cast of a major West End musical.

Maureen lives in New York City, and when she is not writing, spends her time in a relentless pursuit of the perfect cup of coffee. If you know where it is, get in touch with her at once.

Omnibus
Let It Snow (2008) (with John Green and Lauren Myracle)

Love, Meg (2007)
C Leigh Purtill
"If you've ever had a celebrity crush, you'll love Meg and her story will keep you guessing."

A Study in Charlotte (2016)
(Charlotte Holmes, book 1)
Brittany Cavallaro
"A thrilling twist on a classic. Readers will be pulled in by both the riveting mystery and Charlotte Holmes, a brilliant heroine with secrets of her own."