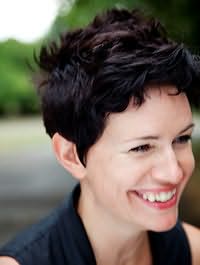 (b.1974)
Sarah Hall was born in Cumbria in 1974. She received a BA from Aberystwyth University, Wales, and a MLitt in Creative Writing from St Andrews, Scotland. She is the author of Haweswater, which won the 2003 Commonwealth Writers Prize for Best First Novel, a Society of Authors Betty Trask Award, and a Lakeland Book of the Year prize.

Her third novel, The Carhullan Army, was published in 2007, and won the 2006/07 John Llewellyn Rhys Prize, the James Tiptree Jr. Award, a Lakeland Book of the Year prize, was shortlisted for the Arthur C. Clarke Award for science fiction, and long-listed for the Dublin IMPAC Award. The Carhullan Army was listed as one of The Times 100 Best Books of the Decade.

Her fourth novel, How To Paint A Dead Man, was published in 2009 and was longlisted for the Man Booker prize and won the Portico Prize for Fiction 2010. Her work has been translated into many languages. She was recently given the 2014 E.M. Forster Award from the American Academy of Arts and Letters.

Her fifth novel, The Wolf Border, will be published in 2015.

Her first collection of short stories, titled The Beautiful Indifference, was published in 2011. The Beautiful Indifference won the Portico Prize for Fiction 2012 and the Edge Hill short story prize, it was also short-listed for the Frank OConnor Prize. Recently she has been shortlisted for the Sunday Times EFG Private Bank Short Story Award and has won the 2013 BBC National Short Story Prize.

Sarah Hall is an honorary fellow of Aberystwyth University, and a fellow of the Civitella Ranieri Foundation (2007). She has judged a number of prestigious literary awards and prizes, including the David Cohen Prize, The John Llewellyn Rhys Prize, The Sunday Times EFG Short Story Award, and the inaugural Folio Prize for Fiction. She tutors for the Faber Academy, The Guardian, the Arvon Foundation, and has taught creative writing in a variety of establishments in the UK and abroad. She has written original drama for radio, and has presented programmes on both radio and television. Sarah currently lives in Norwich, Norfolk, with her partner who is a doctor.

A Book of Blues (2011)
Courttia Newland
"One of the most imaginative, free-thinking writers working today. I love his work."