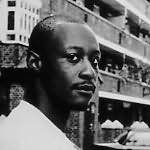 (b.1973)
Courttia Newland was born in 1973 in Hammersmith, west London, where his highly acclaimed first novel, The Scholar (1998), is set. His second book, Society Within (1999), is a collection of short stories about young black Londoners. In his latest novel, Snakeskin (2002), a black politician is shocked by the police investigation into the murder of his daughter.

Courttia Newland is the editor of IC3: The Penguin Book of New Black Writing in Britain (2000). His plays include the acclaimed The Far Side, about the murder of a young black man by a white youth, and Mother's Day, premiered at the Lyric Studio Hammersmith in autumn 2002. He is Writer in Residence at The Post Office Theatre in West London and is currently writing the screenplay to a film adaptation of The Scholar.

Collections
Music for the Off-Key (2006)