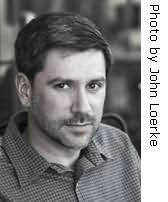 Warren grew up in the Hudson River Valley of New York State. Upon obtaining his teaching degree from the University at Albany, he moved to Colorado, married his wife Kathy, and settled in the Platt Park neighborhood of Denver where he can usually be found typing away at the local coffee shop or browsing the selection at the Tattered Cover.

His first novel, KOP, was published by Tor Books in 2007. Its sequel, Ex-KOP, is due to hit shelves in October of 2008. Currently, he is writing KOP Killer, the third book in the KOP series