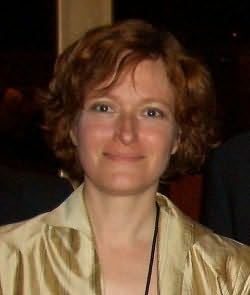 Mary Robinette Kowal was the 2008 recipient of the Campbell Award for Best New Writer and a Hugo nominee for her story “Evil Robot Monkey.” Her stories have appeared in Strange Horizons, Asimov’s, and several Year's Best anthologies. She is the author of Shades of Milk and Honey (Tor 2010), the fantasy novel that Jane Austen might have written.

Mary, a professional puppeteer and voice actor, has performed for LazyTown (CBS), the Center for Puppetry Arts, Jim Henson Pictures and founded Other Hand Productions. Her designs have garnered two UNIMA-USA Citations of Excellence, the highest award an American puppeteer can achieve. She also records fiction for authors such as Kage Baker, Cory Doctorow and John Scalzi.

She is serving her second term as Secretary of Science Fiction and Fantasy Writers of America. Mary lives in Portland, OR with her husband Rob and eleven manual typewriters.

Collections
Scenting the Dark and Other Stories (2009)
Shadows Beneath (2014) (with Brandon Sanderson, Howard Tayler and Dan Wells)
Word Puppets (2015)

Between Two Thorns (2013)
(Split Worlds, book 1)
Emma Newman
"Emma Newman has created a reflection of Bath that reminds one that charming is not safe. Between Two Thorns shows the darkness beneath the glamour of the social Season. Learning to be a young lady has never seemed so dangerous."

Murder on Millionaires' Row (2018)
(Rose Gallagher Mystery, book 1)
Erin Lindsey
"A charming mystery of manners. Ghosts, murder, magic, and a heroine who's impulsive but also refreshingly smart about her choices. What's not to love?"