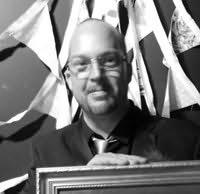 GLYNN JAMES, born in Wellingborough, England, in 1972, is an author of science fiction, post-apocalyptic, dark fantasy, horror, and dystopian fiction.

His love of science fiction and horror began when he was eight years old after discovering HP Lovecraft and Richard Matheson, and then later on James Herbert, Clive Barker, and Stephen King.

In addition to co-authoring the ARISEN books, he is the author of the DIARY OF THE DISPLACED series.